As plastic surgery continues to barrel its way into mainstream America, more and more men are choosing to undergo procedures once seen as exclusive to women.  The majority of men are undergoing liposuction, but as baby boomers are now reaching retirement age, male facelifts are increasingly common.

However, a man’s facelift is harder to do than a woman’s facelift.  Why?  There are some aesthetic aspects, surgical techniques and hair and skin considerations unique to men that require a little more thought, as well as time, to get right.

The once ruggedly handsome celebrities that have been beaten up by the media for “bad” facelift surgery all have one thing in common.  Their results look too feminine.

If you look at Kenny Rogers or Burt Reynolds or Bruce Jenner or any number of famously bad male facelift surgeries, you’ll notice that things look somewhat “off,” but it’s hard to put your finger on what it is.  Yes, it’s clear they had surgery and don’t resemble their former selves, but specifically, they no longer look manly.

Basically, if you pull the facial structures tight, it feminizes people.  In a woman, it’s okay to pull tight and have a really sharp jawline.  In a man, to the eyes of most people, it tends to feminize them.

I don’t totally perceive why this is the case, but it’s rare to see a buff guy with a youthful face, not too many wrinkles, and a sharp jaw line.  Those guys look like models – not movie stars.  Young men who fit this profile can appear very androgynous, like a Calvin Klein perfume commercial.  In older men, it’s psychologically jarring and gives the mind pause when you know someone is in their 40s or 50s, yet he has few wrinkles and very tight skin.

Personally, I think it’s more natural for older men to have a touch of loose skin, and to try to reduce, but not eliminate, all wrinkles.  If the “after” photos have really tight skin with no wrinkles, to me, it just looks too “surgerized.”

Aesthetic judgment is just as important as surgical skill.  It may sound strange, but sometimes leaving a little loose skin or a slight wrinkle on a man is actually going to give a more natural and better result than eliminating ALL loose skin and wrinkles.

Simply put, a man’s face is bigger than a woman’s, which makes the surgery longer.

Also, men have heavier and thicker skin than women.  Due to the heavier skin, men usually have a less dramatic result than women, which is a good thing since we’ve already covered how subtle improvements are best for men..  Men may also experience “rebound relaxation” because of their skin’s heavier quality.  This refers to the skin going back to its pre-operative condition shortly after surgery and not remaining tight.

Men generally have a lot of facial hair.  These hairs have more blood flow, and thus, will potentially cause more bleeding right after surgery.   Even if there is no surgical complication from bleeding, there is a chance that there may be more bruising and swelling. 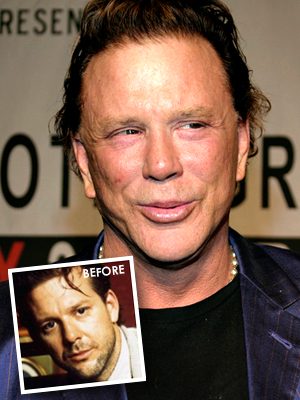 Facial hair also means longer sideburns, which need to be preserved.  However, if you pull the skin too much or too tight, this will eliminate all or some of the sideburns and create an unnatural look (see Mickey Rourke).   Pulling back the skin that covers the jaw and anchoring it behind the ear can result in beard skin (and continuous beard hair growth) behind the ear. Because of this, the incision may be made just in front of the ear and behind the sideburn.

More hairline difficulties arise if a man wants a brow or forehead lift.  Yes, sad but true –  most older men will have a receding hairline.  It’s important to consider the aesthetics of a smooth forehead on a man, and I would typically recommend skipping the forehead lift and just using Botox to achieve a more natural look.   I think that some celebrity male facelifts have been too aggressive in brow lifts, which result in

–  No wrinkles on the forehead.  On a 55-year-old guy, it just doesn’t psychologically mesh with the rest of the man’s face.

–  More forehead skin and space, which possibly raises the hairline itself.

Hiding the incisions from a facelift becomes a much greater challenge when operating on a man.  Men have sparse hair around their temples and ears, whereas women can use their long hair to hide all sorts of sins.  Men’s scars usually end up in the hairline above the ear and around the ear, but care must be taken to not disturb the hair growth or to create a glaringly obvious scar on the face.  Men don’t have the benefit of wearing foundation, so while I always take precision with my surgical incisions very seriously, it’s especially true on men.

In short, men can have a fantastic facelift result and still look like MEN by choosing an experienced plastic surgeon, not going for dramatic change and using less invasive procedures around the eyes and forehead.

If you’d like more information on male facelifts or to schedule a consultation with Dr. Kim, contact our Patient Care Coordinator, Caroline, at 415-354-8148.