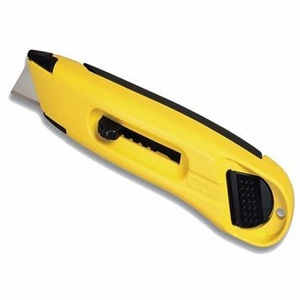 A British father was so distraught about not being able to afford a sex change operation that he attempted to remove his own penis – with a box cutter.

She is now known as Kirsty Cass, but Andy Cass was a husband and father who had struggled with gender identity issues since he was a boy.  One night after a few too many beers, Cass says he looked down and thought, “that shouldn’t be there.”

“I went downstairs and got a Stanley knife out of my toolbox and just started hacking away,” Cass says.  “The pain was unbelievable. It only took a couple of minutes of cutting before I quickly sobered up and realized the danger I was in.”

Cass called an ambulance, and she woke from surgery several hours later with her penis reattached.  Doctors explained to that she would need it later if she wanted a proper sex reassignment surgery.  Eventually a psychiatrist diagnosed Cass with gender dysmorphia, which qualifies her to receive the surgery and have it paid for by Britain’s National Health System.  Cass is now living full-time as a woman and will undergo a sex change operation in several months.

Do I Have Bacon Grease on My Shirt or Do You Smell Cancer?

Brenda Jones, a 47-year-old mom, is crediting her spaniel with saving her life.  No, the pooch didn’t wake her during a house fire or jump in the pool to save her from drowning.  This clever pup sat on her master’s lap and stared at her.  Then the dog pawed at her left breast, which caused Jones to jump with pain.

When she looked for signs of injury, she found a lump on her breast.  It was confirmed as stage 3 breast cancer by her doctor a few days later.  Jones underwent emergency surgery and is now undergoing chemotherapy and radiation.  She says her loving dog, Mrs. Murphy, saved her life.

I suppose it’s not totally implausible.  Dogs are well known for having a sense of smell 1 million times more powerful than humans.  But it could be just as likely that Jones had dropped a few cookie crumbs on her shirt.  Either way, Jones reports that her friends are now a little nervous when they visit the house only to find Mrs. Murphy staring at them.

Youch!  Growing taller can be such a pain.  Literally.  Most of us grow taller throughout our childhoods and teen years.  But once we stop, that’s it.  We get what we get.  But for some people, that’s just not good enough.

In China, an orthopedic surgeon is leading the way in helping short people achieve new heights.  But his methods are not for the faint hearted.  To allow his patients to gain 1.5 to 3 inches in height, Dr. Li Rongguo saws apart the tibia and fibula, the bones below the knee, in both legs without touching the bone marrow.  He then inserts metal braces that are attached to both ends of the bones with metals screws.

After a week of agonizing pain and plenty of sedatives, patients stop taking medications and begin manually turning each screw three times a day for up to 16 months.  Each little stretch causes new bone tissue to grow, and eventually, the goal of being a few inches taller is reached.

The surgery is still shrouded in secrecy and most patients spend up to a year living alone near the hospital in Shanghai while they recover.  But the benefits of height in China are many, including higher pay, social status, and physical attraction.  The same benefits exist in the United States, of course.  They just aren’t so obviously stated.

For example, China places height requirements on almost every job and even requires a minimum height for many university degree programs.  Want to major in Chinese language, history, philosophy or media studies at Anhui University?  If you’re a man, you’ll need to be at least 5’5” inches tall.

After 16 months, another surgery is performed to remove the screws and braces.  The bones are barely strong enough for walking, and more strenuous activity must be avoided for another year.  But who needs legs when your new height allows you to land a great job and buy a new Mercedes? Wacky Wednesday: As Wacky As You Want To Be PIP Breast Implants- Not All Things French Are the Best