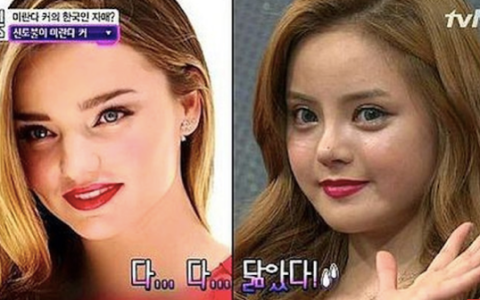 Have you ever been told to be yourself, unless yourself sucks, in which case, be someone else?  Maybe these guys have.  It’s ironic, don’t you think, that each of them got a measure of fame for doing something their fave celebrities never did: imitating others.

We all love the Victoria’s Secret models.  They’re beautiful and often very sparkly.  But one South Korean fan, particularly fond of Miranda Kerr, so adores the Australian model, that she enlisted a plastic surgeon to transform her into Kerr’s likeness.  She now has strangers approaching her and attempting to speak English, because she does not appear Korean.  It was the “baby face” that Hong Yuh Reum really liked about Miss Kerr.  Hong claims that she only required eye and nose surgery to achieve the look of the Victoria’s Secret model.  She also uses blue contact lenses, hair color and contouring makeup.  It seems like a lot of trouble, but Hong’s modeling career in Korea has really taken off since her surgeries.

Foot note:  Perhaps the best part about this story, is that she debuted her new look on a Korean TV talk show called “Alien Virus.”  That is so much more awesome than “The Sally Jesse Raphael Show”, or “The View.”   Will some American please produce something here, called Alien Virus? 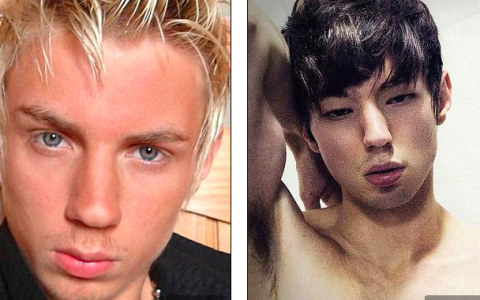 While Koreans are working over time to look like White Westerners, one young white man in Brazil just got an asian makeover.  Formerly named Max, he now goes by “Xiahn,” and wanted to fit in after attending school in South Korea for a year.  Once you’ve committed to 10 surgical procedures and spent $3000, I suppose the black hair dye and contact lenses are a minor finishing touch.  The main change he made was in reshaping his eyes.  Xiahn is a proponent of changing yourself into the image you most identify with, and says his dad supported his decision to undergo surgery.  Here we have a 25 year old man, going through a phase in which he loves K-pop.  God bless his mom, she saw some red-flags, but even she proved unable to stop the K-pop. 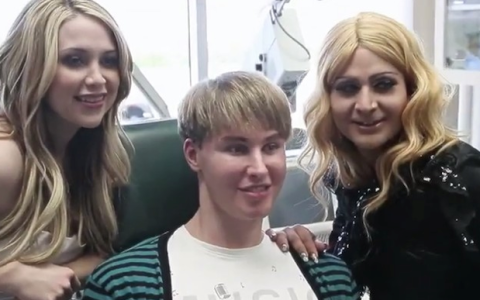 I’m warning you now.  Don’t click here, unless you want to cringe yourself to death.  I myself barely escaped this video alive.  I may be a plastic surgeon, but I am not immune to the horrors which occur when bad music and desperation meet.

You may recall a previous Wacky Wednesday item about the man/boy who had himself transformed into Justin Beiber.  Well, he’s not satisfied with merely looking like him.  He’s compelled to make music videos too.  And if you question the talent and showmanship of the real Biebs, it’s only because you haven’t yet suffered through the artistic stylings of the Wanna-biebs.  (Which SHOULD be the name of any solo albums he later releases.  You’re welcome, Wannabiebs.) 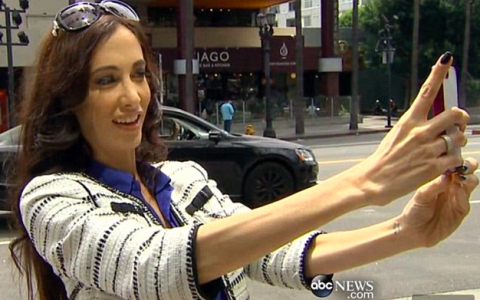 If You Can’t Beat Them, Join Them

The way I see it, you have two choices.  You can bemoan the selfie culture we live in, or you can embrace, perfect, and capitalize upon it.  Triana Lavey has chosen the latter.  She SO recognized and harnessed it’s power, in fact, as to become a leading consultant in a firm that specializes in online you-tube talent.  She gets paid handsomely to promote her clients, who have millions of followers each.  Her first order of business with a new client is a scrupulous training on the finer points of selfie-taking.  With Triana’s help, they can get more exposure in various forms of media, as well as receive lucrative deals for product placement in their web offerings.

Triana herself takes a great selfie.  She should.  She had almost $15,000 in surgery to make sure she put her best face forward.  This lady is the ultimate realist.  #respect.  In case you are wondering, Triana says the perfect selfie, “is a fun organic moment, documented in a single photo.”