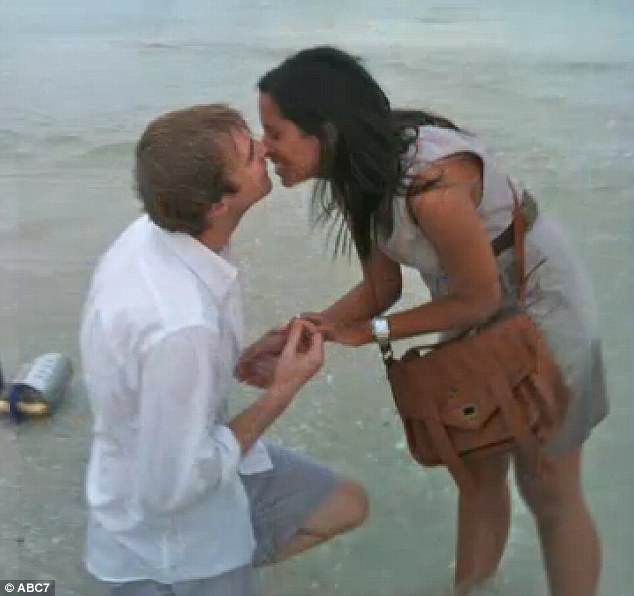 Brain Surgeon Does Something Really Stupid
It’s just a walk on the beach – not brain surgery. We’ve all heard a similar refrain.

Luckily for brain surgeon, Dr. Steve Carr, it really was just a walk on the beach and not brain surgery. Because he screwed up big time.

Dr. Carr flew from Denver to Florida with his girlfriend for the holiday weekend with the intention of proposing to her on the beach. He buried the ring and planned to surprise her with it while they dug in the sand. But once they started digging, the diamond was a no show.

The doctor asked more than two dozen beachgoers to help him find it, but two hours later, his (lucky for him) soon-to-be fiance took matters into her own hands and called a professional metal detecting expert who found the sparkler within minutes.

She said yes to Dr. Carr explaining, “‘You gotta feel sorry for the guy, digging around in the rain for a couple of hours. How can you say no to that?”

Ah yes, the sympathy engagement. Just what every man dreams of.

Double Whammy. Baldness May Increase Risk of Prostate Cancer
Well, George Costanza would not be happy to hear this news. He blamed his baldness on everything from not getting the job to not getting the girl. But according to a new study, bald men may be getting something else – cancer.

The good news is that the study was not very large – only 214 subjects – and therefore, the results don’t mean much until a larger study is conducted. But if you are bald, it wouldn’t hurt to get yourself checked out.

In yet another study that I don’t understand the point of, psychologists found that men with wider, more traditional manly faces did not fit the “bad to the bone” stereotype and were actually much more protective and supportive of close friends and colleagues than men with less rugged faces.

And in other news, when it rains, you may or may not get wet. I seriously don’t know who is paying for these studies.

Freaky Snake Robot Surgery on the Horizon
After taking over automobile factories and computer chip manufacturing, it looks like robots will soon put me out of a job, too.

The next generation of surgeons will actually be tiny, snake like robots that roam around inside the human body armed with tiny scalpels, scissors and stitches. Robotic-assisted surgery is already happening in hearts and other organs, but they are controlled by and attached to doctors. The newest versions won’t be tethered to anything.

Imagine a much quicker recovery from heart surgery. Instead of opening up the entire chest, a small incision is made and the robot crawls in and does its thing.

Surgeons say that the potential is enormous. Instead of operating on a heart valve from the outside, it is like being a shrunken surgeon who can actually fix things from the inside out.

I’m looking forward to the day when I can kick back and read the New York Times while a snake robot crawls inside a patient’s love handles to perform internal liposuction.

Hilarious Videos of People Waking Up from Anesthesia
I’ve always stressed the importance of a supportive family to be there for patients when they wake up and begin to recover from surgery. The following videos were taken by loving family members who did just that. But they also videotaped it and put it on YouTube. Ah, the ties that bind – and embarrass.