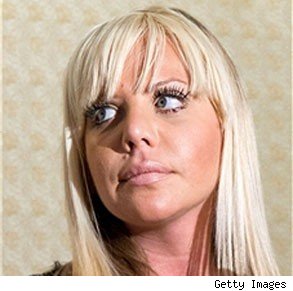 {Too hot for retail. And Orthodox Jews.}

Publicity-loving lawyer Gloria Allred is back in the news (wait, was she ever out of the news?) for taking on a client who claims she was fired from a lingerie store for being “too hot.” What?

The buxom 29-year-old New Jersey woman says she only worked at Native Intimates for one week but was told to tape her breasts down and to tone-down her sexy look because it was offensive to the owners – who are Orthodox Jews. And I’ll say it again. What?

Details, if you must have them, can be found here.

The third recent victim of a rare, flesh-eating bacterial infection recently completed his sixth surgery where doctors began rebuilding the man’s groin area after two pounds of tissue were removed in a bid to save his life. Contrary to popular belief, it seems most men would rather NOT die than lose their groins.

Bobby Vaughn, 32, is recovering in the same hospital as Aimee Copeland, the 24-year-old  woman who has received much media attention after she contracted the rapid moving flesh-eating infection known as necrotizing faciitis when she cut her leg on a zip line in early May. Copeland’s leg was amputated but the disease spread so fast, doctors also had to remove the foot from her other leg and both hands.

Meanwhile, another young woman is fighting for her life in Georgia after she contracted necrotizing faciitis shortly after giving birth to twins. Lana Kuykendall, 36, had not even been home from the hospital for 24 hours when she and her firefighter husband noticed a suspicious spot on her leg. Her husband rushed her back to the hospital and as they waited to be seen, they watched as the spot grew one quarter inch in less than an hour. Kuykendall has undergone seven surgeries and is listed in critical condition.

These cases are rare and apparently not related to each other. Necrotizing faciitis is a particularly nasty and aggressive bacterial infection that causes body tissue to die, including skin, muscles and fat. Symptoms include small, red bumps on the skin, rapidly spreading bruising, fever and vomiting. Patients must be treated quickly to prevent death.

Looking yourself over now?

Wife: “Help! My husband is not breathing! He has collapsed!”

This was a real-life nightmare for panicked woman after her 911 call was transferred to a sleeping dispatcher. The dispatcher’s snoring is so loud that it is clearly heard on the recorded call and at one point, another dispatcher asked if the noise was coming from her husband.

Supervisors said that the uniformed firefighter was working as a dispatcher and was 17 hours into a 24-hour overtime shift. Then they suspended her while they launched an investigation.

Um, excuse me. Didn’t you just say that the dispatcher was 17 hours into a 24-hour overtime shift? Investigation complete. And, yet, it’s the dispatcher that gets punished. Perhaps the supervisors doing the investigating need a quick lesson on human biology and sleep patterns.

You Gotta See This

A Lithuanian artist invited models to his studio and then shot photos of them while they were blasted with an industrial strength wind blower.

Ever wonder what you’d look like in a hurricane? Here’s your hilarious answer.