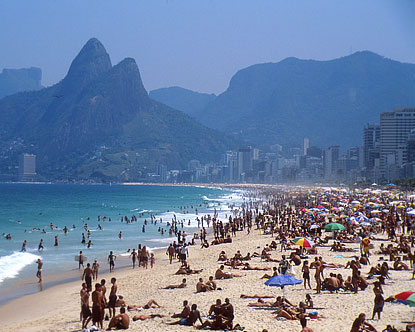 The wacky news is simply coming out of the woodwork this week. From prostitutes to placentas, there are just so many stories to tell. Let’s get right to it, shall we?

Life, Liberty and the Pursuit of Hotness
Brazil is the second largest consumer of cosmetic plastic surgery behind the United States, but the stigma and secrecy that we seem to attach to cosmetic treatments is all but gone in the land of string bikinis and ample derrieres.

Sure, the rich and powerful are nipped and tucked to perfection, but in Brazil, even maids, waitresses and nannies have access to lasers, peels and silicone assistance – because in Brazil, beauty is a right.

In Rio de Jeneiro alone, there are more than two dozen hospitals and clinics that provide free or nearly free cosmetic surgery procedures to people who can’t afford them. The philosophy behind the bargain basement beauty is that it will improve the self esteem and psyche of the patient, and by extension, the nation as a whole.

I think Obamacare should be expanded to include this, as well. I mean, if we could totally eliminate our exposure to ugly people, we’d probably reduce the national debt and achieve world peace.

Spain’s Political Prostitutes
As women throughout history have known, withholding sex from your partner can achieve all sorts of useful things. From extra help with the kids and laundry to an increase in flowers and gifts, abstinence can be a powerful negotiating tool.

In what I gotta say is a pretty unique move, high-end prostitutes in Spain are using the power of sex (or the lack thereof) to bring about economic change in their struggling country.

Madrid actually has a trade association of escorts, and watch out guys, they’re organized. To improve the economic climate, they have decided to withhold sexual pleasures from all bankers until the bankers agree to extend more loans and lines of credit for families and small businesses who are cash strapped during Spain’s debt/credit freeze/recession.

The president of the trade association noted that the government and the Bank of Spain have not acted to increase the credit flow and said, “We are the only ones with a real ability to pressure the sector, We have been on strike for three days now and we don’t think they can withstand much more.”

It has gotten so bad for the lonely bankers that many have resorted to posing as architects and even (gasp) lawyers when visiting the ladies of the night.

Nadya Suleman, the mother of several litters of children totaling 14 or 16 or 22 or something, is back in the news with a newly released photo of herself posing topless.

She’s covering “the girls,” but nobody is interested in those. Everybody wants to take a look at that traumatized belly, right? No? Well, if not, don’t click here.

Woman Accused of Raping Man After Breaking Into His Home
A 39-year-old Australian woman has been charged with rape in Australia after breaking into a man’s home and performing oral sex on him without his permission.

Okay, we’re not making fun of sexual crimes or condoning them in any way. But we think that men in Australia might now be leaving their doors and windows open when they go to bed at night. Just sayin.

The McDonald’s Hot Coffee Lady is Still Alive?
In a very 1990s-esque lawsuit, an 83-year-old woman from Queens, New York is suing Apple for $1,000,000 after smashing her face into the glass door at an Apple store in Long Island. She broke her nose.

Okay, first of all, what is grandma doing going to the Apple store? Maybe she thought it was a museum. Anyway, she may or may not need rhinoplasty surgery (nose job), but those only cost a tiny fraction of the $1,000,000. But if the jury would like to award her the $1,000,000 with the stipulation that it must all be spent on facial surgery, then I’d be happy to offer her a consultation.

Susan Sarandon Admits to Plastic Surgery, But Still Probably Lying
Actress Susan Sarandon is being praised for being honest about the surgical help she has recently received to keep her youthful looks going.

Sarandon, 65, admitted to getting some liposuction under her chin and under her eyes. Wait. What? Liposuction under the eyes is unheard of. You want more fat around your eyes as you age to keep them from looking hollow, not less.

If I had to guess, and it’s only a guess as I am not her doctor, then I would say she had lipo in probably more areas than just her chin and that she had an eye lift. Either way, she looks great.

Brazil Bans Breast Implant Imports (and Ugly People)
Okay, back to Brazil for one last bit of news. They didn’t really outlaw ugly people – yet. But the country did ban breast implants from being imported until its own government agency can certify the safety of the implants.

This move follows the recent PIP breast implant disaster in Europe that revealed the PIP implants contained industrial grade silicone and a higher rate of rupture. Now all of those thousands of implants need to be removed.

Brazil says the certification process will take approximately two weeks. Oh, well I’m sure glad that the screening process is so … thorough? #politicalpandering

You Kiss Your Baby With That Mouth?
Ewwwwwww….we saved the worst for last.

The beautiful and talented January Jones from the hit show Mad Men made a startling revelation this week. She said that she ate the placenta from the recent birth of her son. I’ll pause for a moment while you take a minute to digest that bit of TMI.

Ms. Jones has kept the identity of the baby’s father a secret, and yet, she chose to share this. If she’s so good at keeping secrets, I really wish she would have kept this one.

From her perspective, and that of many others apparently, women should ingest the placenta as a way to restore energy and aid in recovery after childbirth. She points out that humans are the only mammals that don’t eat their own placentas. We are also the only ones to drive cars, use iPads and wear clothes. I think the separation is clear and preferred. But what do I know?
No word on if she took it in pill form after having it ground up as some women do, or if she sauteed it in butter and served it with fava beans and a nice chianti.