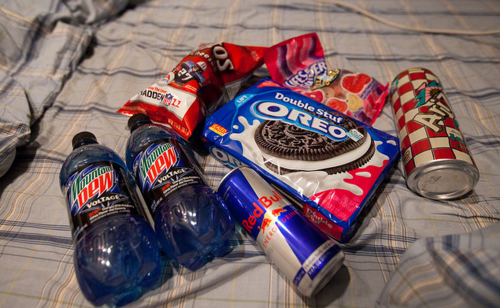 What Is It With These Pageant Moms?

It’s that voyeuristic horror that keeps shows like “Toddlers & Tiaras” on the air.  As if three year olds with hair extensions, fake teeth and spray tans weren’t disturbing enough, we now get the full details from one pageant mom about the secret, sugary concoctions that are used to energize the kiddos before they hit the stage in miniature prostitute outfits.  (Totally off topic, but has anyone else noticed that almost every pageant mom is very overweight?  I’d even say obese.  There has to be some sort of psychological explanation here.  Anywho….)

So anyway, some moms use Pixie Stix, known in pageant circles as “Kiddie Crack” (nice) but June Shannon says these had no effect on her six-year-old daughter.  So now she gives her daughter “Go-Go Juice” before competitions.  Go-Go Juice is 20 ounces of Mountain Dew with “a hint of Red Bull.”  What the what?

Check out the video here.  Anyone else feel like staging an “Occupy Pageants” movement to get these moms to stop ruining their kids?  Meh.  Me neither.

Dang, this guy stole my idea.  I’ve been saying for years that if someone can figure out how to create something that involves Christianity and sex, the two best selling things in America, it would be a million dollar idea.   Well, recently, other people have been thinking the same thing.

First a Christian dating web site launched (genius) and now a megachurch pastor has written a sexually explicit guide to marriage.  Ka-ching.  It went straight to the bestseller list at both Amazon and Barnes & Noble.

Pastor Mark Driscoll and his wife, Grace, wrote “Real Marriage: The Truth About Sex, Friendship and Life Together,” which tackles taboo topics as what Christians are morally allowed to do in the bedroom.  According to the Driscolls, pretty much anything goes within marriage.  And thus, Christians are rushing out to buy the book :)

Well, this has nothing to do with plastic surgery, but it’s a slow news week in the medical world, so this was just an FYI.  Let’s move on, shall we?

Okay, okay, here we go.  Now we’re back on track.  THIS is the kind of story that Wacky Wednesday lives for.

A 21-year-old Iranian man went to get a penis tattoo, because c’mon, why not?  Well, I think we can all think of about 101 reasons why NOT to do it, but anyway, he did it.  And then, he couldn’t get rid of his erection.

No, he wasn’t just excited about the new ink.  The henna-style tattoo was applied using hand-held needles which, are more difficult to use because a uniform depth of injection cannot be achieved. Apparently, the needle went too deep and caused some damage that allowed blood to pool in his penis.  You can read all the medical details here, but basically, he sought treatment that didn’t really work, and it’s not the dangerous kind of erection that causes tissue to die, so…he’s cool with it.  He has declined further treatment, because well, he’s too busy.

In case you’re wondering (and we know you are), the tattoo is Persian script that says “borow be salaamat” or “Good Luck on Your Journeys.”