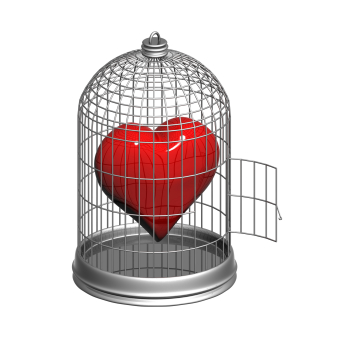 This lady has the best reason for getting breast implants. Ever. She needs them to hold her heart in place.

Let’s back up a little bit, shall we?  A Georgia woman named April Pinkard has had a life full of medical challenges. She was born premature and struggled with a diseased lung that was eventually removed when she was four years old. And that’s when the strangeness began.

As an adult, Pinkard would sometimes feel her own heartbeat in odd places, like on the right side of her chest or in her lower back. She didn’t think much of it. Then when visiting her lung doctor one day, he couldn’t locate her heartbeat with a stethoscope. He quietly slipped a firearm into his white jacket, just in case she was a zombie. Then he sent her to the Mayo Clinic (where they are better equipped to deal with the undead).

What the Mayo docs discovered was that Pinkard had a condition so rare that there wasn’t even a name for it. In fact, Pinkard was the first person confirmed to have a “floating heart,” made possible by her missing lung. Free of its cage, her heart had spent years wandering around her body.

After an intense game of Marco! Polo!, the Mayo team found her heart hiding under her liver, on top of her spleen, laying on its side and lodged between two ribs. Well played, shy heart.  Well played.

As soon as the medical team touched her heart, it stopped beating. Not wanting to risk that again, they filled Pinkard’s innards with water and floated her heart back to its proper place like a cruise ship. But how to keep it anchored in port?

With breast implants, naturally. They built a Fort Knox out of silicone to cage her heart and keep it where it belonged. We can only assume that the implants weren’t placed in her breasts, but rather in her chest cavity, sort of where her missing lung should be. No word on how many implants were used. Even if Ms. Pinkard is the first person to boast 3000 CCs worth of breast implants, at least we know her heart is in the right place.

Anwar El-Balkimy, an Egyptian lawmaker and member of that country’s religious and conservative party, will resign from his post after fabricating a story about being beaten by masked thugs. The truth was – he had cosmetic surgery on his giant schnoz.

El-Balkimy was photographed with bandages covering his face and after telling his whopper lie and even implying that the attack was likely motivated by his political enemies, a solemn parade was held in his honor. And an investigation was launched. And several state ministry officials visited him to offer condolences.

But there must be no HIPPA in place in Egypt yet because El-Balkimy’s doctors totally called him out. They were like, “Dude. That guy was just here for a nose job the day before he claimed he was attacked. Coincidence? We think not.”

I can only hope these pictures of him are the “before” shots. Otherwise, he still needs more surgery.

Fired Kidney Donor Wants Her Organ Back from Boss

In case you thought your boss sucked, this lady probably has you beat.

Debbie Stevens, a 47-year-old Long Island mother donated one of her kidneys to her ailing boss, Jackie Brucia, last year after her Brucia asked if she would be willing to help save her life.

Stevens agreed and underwent surgery to have one of her kidneys removed. All was good until it was time to return to work. According to a report in the New York Post, things started to get bad quickly.

“Stevens said she did not realize that she was in for serious pain, discomfort in her legs and digestive problems after the surgery on Aug. 10, 2011. She said she felt pressured to return to work Sept. 6, before she was ready — even while her boss was still recovering at home. When Stevens went home sick three days after her return, she said, Brucia actually called her from home to berate her.
‘She . . . said, ‘What are you doing? Why aren’t you at work?’ I told her I didn’t feel good,’ Stevens told The Post. ‘She said, ‘You can’t come and go as you please. People are going to think you’re getting special treatment.’ ”

When she complained after several weeks of harassment by her boss, she was promptly fired. How’s that for a Dilbert cartoon? Secret Plastic Surgery on Stars: How Surgeons Pull It Off