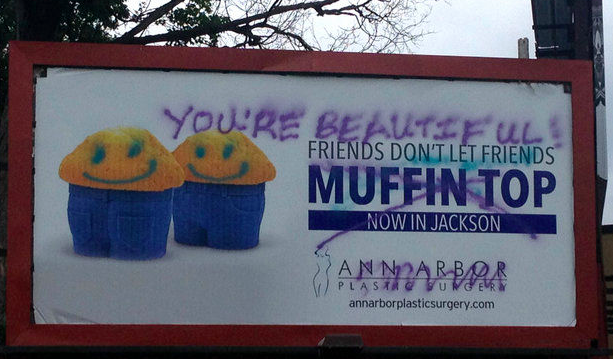 Sometimes we all do things we aren’t proud of.  Maybe even that we are ashamed of.  I mean, shouldn’t I know better than to stay up past midnight when I know I have to be at 5:00 a.m. cardio bootcamp? And how hard is it to avoid backing through unopened garage doors (twice)?  Nevertheless, at LEAST, I don’t spend my marketing dollars on insulting prospective patients.  Mostly because I’m a decent human being, but also partly because it seems like that would actually be bad for business.

Just ask the Ann Arbor Plastic Surgery office, who posted  (and later removed) this billboard to advertise his plastic surgery medical practice.   How hard is it to recognize that patients who have been bullied and insulted as a result of their appearance, are looking for solutions and support from their doctors?  They can go to anyone for more abuse.  And it’s way cheaper too.

Software That Ages You

Photo Credit:  U of Washington

Computer science might serve up Kardashian apps and full body airport scanners, but it also can be useful sometimes.  Now, a new program can “age” a photo of a young child, to produce a surprisingly accurate depiction of what the child will look like in later stages of life.  This capability has been a difficult achievement, since lifestyle factors into the aging process.  Still, studies show this program can produce predictive ‘photos’ that can hardly be distinguished from real photos.  Although weird to do recreationally, it could be helpful for missing person cold cases, and for displaced adults seeking reconnections with lost family members.

Timing is Everything; Surgery Isn’t

It’s no surprise that people get plastic surgery in between jobs.  *Despite all the breathless indignation by those who demand the gnashing of unemployed teeth.*  Severence pay is often used for plastic surgery, says one Seattle plastic surgeon, and that apparently seems weird to some?  Well, not me.

Jobs are a major obstacle to plastic surgery because recovery time and office gossip/politics often make the process more trouble than it’s worth. What could be a better opportunity than a break between jobs?  Seems logical to me, that people want to look their best in a new career, which takes confidence at a time when some are at their lowest.

But this article points out that youthful marketability is more than a facelift or some Botox, and I tend to agree.  So update your wardrobe, and develop a routine and attitude to sustain high energy levels.  What could be less marketable than a new employee who shuffles her feet, yawns, and wears a slouchy brown cardigan?

Ancient Rome had plastic surgery.  Yes.  Because as we all know, they were way ahead of their time, and as I’ve pointed out repeatedly, vanity is as old as humanity.  So again, haters should spare us the outrage. Rome is basically just another form of “retro.”

In Rome, back scars were considered shameful, gladiators lost body parts, physical abnormalities caused rejection, and patients wanted the “Roman Appearance.”  Early surgeons there addressed these concerns and even performed breast reductions.  All with no electricity or drive through coffee retailers.  Man, do we have it easy.

Do we really need a “study?”

Studies so often confirm what we already know, that I find them wacky.  For example: studies that find women talk more than men; or that watching a movie is more fun than a grueling workout.

And now we have been blindsided by the academic revelation that sleep deprivation makes us look tired.  That’s right, and smoking accelerates the appearance of facial aging.

Yeah, I hope you held on to your hat there, because that just blew you away, right?   The studies were done via participant reactions to photographs.  Subjects who were sleep deprived were rated as fatigued and sad, which also impacted their impressions of competence and trustworthiness.

I submit those feelings are real.  Who isn’t sad when they lose sleep?  As for the smoking study, the subjects were identical twins, and the smoking twin looked older.  But in fairness, it might have been due to the insufferable lifetime smugness of the non-smoking twin.