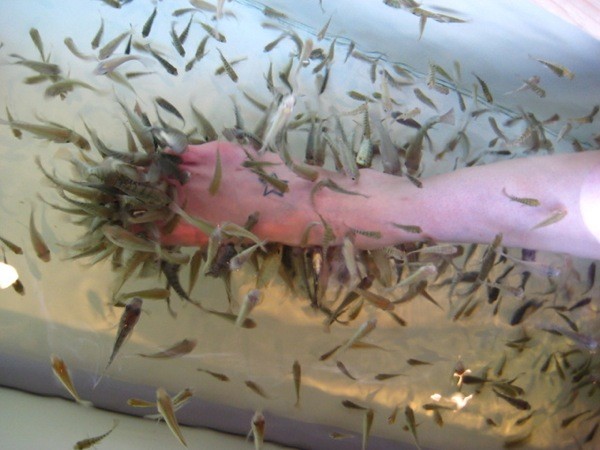 Honestly, This Gives Me the Heebie Geebies

We do some pretty strange things in the name of beauty. Fish pedicures, my friends, is yet another.

The practice of immersing your feet into a tank full of 200 or more nibbling fish to get softer soles has been popular for many years in Asia and has spread to Europe more recently. Some nail spas in the United States are trying to capitalize on the craze, but this treatment, described by some as “thousands of tiny kisses,” is still illegal in more than a dozen states.

For the ticklish or fish wary (raising my hand), you can expect to plunk down about $45 for 30 minutes of profound psychological distress.

The world’s most famous surgerized dictator was killed this week in Libya.  Gaddafi somehow found time between torturing his citizens and bombing international flights to undergo cosmetic surgery on several occasions.

Ding dong, the dude is dead.  We’re not shedding any tears about his passing either, but here is a photo retrospective of things he did to his face while in power.  Does anyone else think he looks like an even more deranged version of Keith Richards in some of these?

A man accused of stabbing someone in 2009 was arrested in China during a raid on a whore house.  Peng Yanzhao was initially suspected to be his older brother until it was discovered that it was Peng himself who had stolen his brother’s identity and used plastic surgery to look more like him.

Peng underwent surgery in a “black clinic” to remove a mole from his forehead, add a scar and alter his lips, according to the Shanghai Daily newspaper.  Peng sounds like some brother.  Et tu, Brute?

The folks over at Cracked.com put together a pretty funny list and commentary about the 7 Most Pointlessly Horrifying Plastic Surgery Procedures.  Warning: Not safe for work if your boss is a humorless productivity fan.  If he’s cool, then there aren’t any naughty pics or anything. Exercise Essential to Keep Fat At Bay After Liposuction