Some people keep plastic surgery for themselves.  A little secret for their intimate life.  Others keep it subtle and strive for a natural look.  And then….there are the peacocks of the plastic surgery universe.  Those who take it to the extreme and do so on their face.  You can run but you can’t hide these bold decisions.

Irony On the Cheap

Get This Man an Implant, stat!

Michelangelo Would be a Plastic Surgeon Today

Those Red Flags Are Her Lips 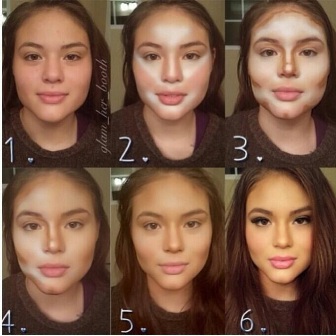 Irony On the Cheap

Makeup: it’s not just for Hollywood anymore.  Check out dozens of pics like this on collegecandy.com.  Some are pretty amazing.

When I heard of makeup that was “opaque” or “contouring” in past years, I conjured an image of a TV news anchor so heavily caked in the stuff, as to look partially or mostly embalmed.  But now, it’s just the latest way to achieve the everyday illusion of a different facial contour.  Proponents of makeup are often the foe of plastic surgery (aka: haters), but I shall not reciprocate the hate.  Instead I will just pose the following question:  If one woman gets a surgical procedure with a few days of down-time, and another woman spends an hour every morning focused on every facial curve in the mirror… for years… who’s the obsessed one? 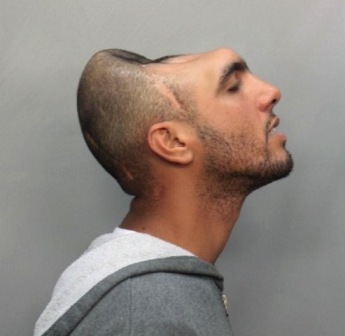 Get This Man an Implant, stat!

We are all wondering the same thing here, right?  “What surgeon is responsible for this poor man’s “reconstruction,” and is it any surprise that walking around like that would lead him to a life of crime?! 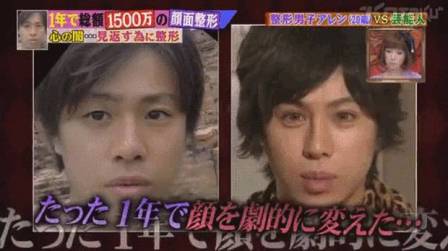 Michelangelo Would be a Plastic Surgeon Today

This might look like the latest case of “I got surgery to look just like ___.”  But a closer reading of the article, reveals some notable differences between ‘Alan’ from Japan, and human Barbie, Middle-aged Justin Beiber, South American Superman, Average Ryan Gossling, etc.

1.)   This dude isn’t trying to copy a real live person, but an ancient stone statue. Crystal clarity: He is a 20 year old asian who wants to look like Michelangelo’s David.  Let that sink in way down deep.  A pretend face from a different age group, time, culture and race.  It’s a cinch, really.  No big.

2.)   His $150,000 wort of surgery was covered by “older” sugar mommas (plural), at no cost directly to him.  Despite outing the devoted benefactors on international media, apparently this kid still holds the power to extract millions from these women, allegedly without a sexual relationship.  So what exactly is the benefit to the bankrolling cougars?  Because he… how to be gentle… still doesn’t look like David.

3.)   As a patient, this guy can recognize the timeless beauty of the rendering of David, but not the asinine trendiness of his bouffant hair.

4.)   I do not care how much the old lady and boy-toy pay you, if you’re a plastic surgeon, you should have something inside, that prevents you from surgically creating bags under the smooth eyes on a 20 year old face.  Period, end of story. 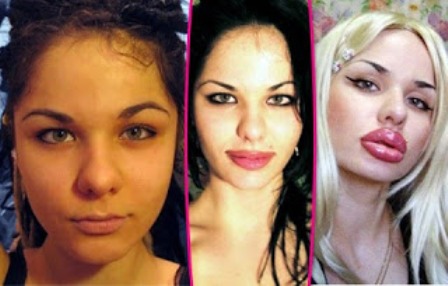 Those Red Flags Are Her Lips

Kristina Rei is a young woman from Russia who joined the ranks of the modified-beyond-recognition by the tender age of 24, and has apparently snagged herself the Guiness Book World Record for most silicone injected into one’s lips.  Congrats?

The progression of photos here showcases Kristina’s escalating cry for help journey toward lips large enough to make her feel good.  Over 100 injections.  I notice she has added horns, scalp tattoos, dreds, and impressively pointed and stretched earlobes to her attention-nabbing quiver, but none of these compete with her bright red, record breaking (can I still call them…) lips.