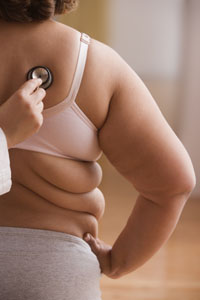 Well, friends, the bad news about being overweight just never seems to end.  This time, researchers have found that in addition to increasing your risk for diabetes, heart disease and a myriad of other health problems, obesity will increase your risk of developing complications after elective breast surgery by almost 12 percent.

The November 2011 issue of Plastic and Reconstructive Surgery, the trade journal for the American Society of Plastic Surgeons, includes the results of a four-year study (2002-2006) that included more than 8,000 patients.  In other words, it was an awesome study because it covered a large period of time and studied lots and lots of people.

Thirty-four percent of adults are now estimated to be obese (a body mass index greater than 30), which is up from 15 percent 30 years ago.  The negative effects of obesity on overall health have been well documented, but there haven’t been too many studies that look at the effect of obesity on surgical outcomes.

Here’s how the researchers went about it:

And here is what they found:

Overall, 18.3 percent of obese patients had a claim for a complication, compared with only 2.2 percent in the control group. In other words, obesity increased the odds of experiencing a complication by 11.8-fold after adjusting for other variables.

Why do obese people have more complications?

1.  They usually have multiple medical illnesses that slow down wound healing such as diabetes, etc.

If you’d like to read the full study, it can be found at: http://journals.lww.com/plasreconsurg/Fulltext/2011/11000/The_Impact_of_Obesity_on_Breast_Surgery.5.aspx