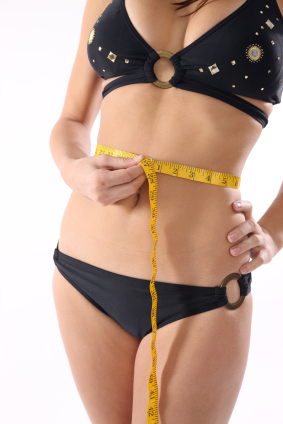 In my San Francisco practice, I get lots of questions regarding liposuction from my patients. On the one hand, everybody loves the idea of getting rid of targeted fat in a short amount of time. On the other hand, most people want to know if there are less invasive ways to achieve the same results. Here’s a question I received just this week.  If you have questions about liposuction or any other cosmetic surgery procedures, please email me at info@drkim.com.

I am a 36-year-old woman with an active lifestyle and healthy diet.  But it seems that no matter how hard I try, I can’t seem to get rid of the band of fat that goes around my entire front side just an inch or two under my bra strap. There is no loose skin, and my lower belly is flat.  I work out 6 days a week and even when I restrict my calories, I will lose weight in my thighs and rear, but that roll of fat just doesn’t budge. So what gives? Is my body programmed to store fat there no matter what I do?

I am very interested in what cosmetic procedures may best solve this problem, especially non-invasive procedures. When I see liposuction on TV, it seems so harsh and seems to come with lots of bruising and recovery.  Are there other methods that could equal liposuction results?  I’ve heard of lasers, ultrasound, heat and cold all being able to “melt” fat.  Are any of these methods effective?

Thanks for the great questions. Ahh, the “bra strap” fat that’s just so hard to get rid of!  This is the bane of many fit women, much like an “inch to pinch” for a lot of fit men in the love handle area. Unfortunately, I would recommend continued attempts at weight loss or traditional liposuction, as opposed to “non-invasive liposuction”, as the best answer for you.

Traditional Liposuction
Traditional liposuction is a well-known technology.  It has been around for more than 30 years now.

Traditional liposuction is essentially mechanical.  It works by filling up an area of fat with something called tumescent fluid, which slows bleeding and reduces pain. Then the surgeon uses a cannula to break up the fat and suck it out. We usually make tiny incisions that are hidden in folds of the body or other inaccessible areas to get to the fat. Scars are almost invisible and bruising is usually absent after 1-2 weeks.

So, what else is available?  Well, a lot actually.  There’s ultrasonic liposuction, laser lipo, cold therapy,vibration liposuction, external ultrasound – are you confused yet?

Liposuction using a laser is great for isolated, small areas of fat but is not substantially better than regular liposuction for larger amounts of fat.  One advantage it does have is that patients can be awake or only sedated, but on the other hand, this limits exactly how much fat you can remove in one session.

If you have a fair amount of fat, traditional liposuction is probably faster, and actually less expensive than going back to the same doctor for repeated laser liposuction in 3 or 4 sessions.  However, if you are willing to undergo repeat small amounts of liposuction every 6 months, then laser liposuction would be a good alternative for you.

Vibration Liposuction
Low frequency acoustic infrasonic vibration, also known as “Tickle Liposuction”  is a technology that uses external vibration to melt the fat.  For various reasons, it has actually not really taken off in the United States.  Personally, I think it has not taken off in the U.S. because of lack of consistent results.

Zerona
The Zerona is an externally applied laser, which melts the fat.  Again, there is an advantage of being able to be done in the office setting with little to no sedation.  The problem again remains that you actually cannot remove that much fat.

If you just need to remove a little fat from your upper arm or below your chin, Zerona will probably work well.  But for areas larger than that, Zerona becomes time consuming and more expensive because you will potentially need multiple sessions to accomplish what one session of traditional liposuction can do.

Zeltiq
Zeltiq is a newer body contouring technology that uses cold therapy.  Essentially, sections of fat get placed in clamps and extreme cold is used to freeze the fat cells and kill them. The problem is that again, only small areas of fat can be removed.  Also, the results cannot be seen for several months.  There is no instant gratification, unlike traditional liposuction.

UltraShape
I am waiting for UltraShape, which is an externally applied ultrasonic liposuction.  It is not FDA approved for the U.S. market yet.  It is available overseas.  Essentially, a probe uses ultrasound in the highly directed and patented fashion to locally melt the fat.  Your body then naturally excretes it.  Unfortunately, UltraShape exists in Europe, South America and Asia, but not the USA.

So until UltraShape comes, I would still stick with traditional liposuction at this time.

Thanks again for your questions! Dear Dr. Kim: How Can I Avoid Liposuction Rippling?