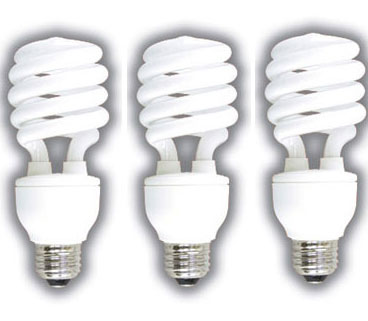 I hate fluorescent light bulbs.  I understand that hate is a strong word, but in general, I don’t like being told what to do.   In California, old-school incandescent light bulbs are banned, and you’re supposed to only use CFLs.  New construction and renovations across the state have been forced to appease the “green Gods” of the environment and change their light fixtures, ceiling lights, outdoor lights, garage lights, whatever-  to fluorescent, or halogen, or LED, but GOD FORBID that you use incandescent light.

Never mind that the light emitted by CFLs are not true white, flattering, or that bright.  Never mind that CFLs don’t seem to last as long as they say they do.  Never mind that if you read the warning label on a CFL, you will completely freak out if they break and you have to clean it up –  you might as well wear a hazmat suit and put  two feet of plastic wrap around the broken glass remnants and call the CDC for a house quarantine.

If that wasn’t enough, now CFL’s cause skin cancer AND sun damage!

Of course, this is a completely alarmist scientific article.  The biggest problem is that they used human skin cells, and did NOT use actual humans in this testing.  Human skin cells in a lab are not the same as testing on, say newborns, or your next door neighbor that you don’t like.  So, no one truly knows if exposing humans to CFLs actually causes skin cancer.

Next fallacy –  this was a quick study.  Typically, it takes years of sun exposure in susceptible ethnic groups to develop skin cancer.  This study doesn’t go out far enough in time to get truly useful results.

Finally, UV radiation does contribute to sun damage-  but again, it’s actual skin on human beings, not skin cells in a Petri dish or cell culture dish in a lab.

Further tests are warranted.  However, this is NOT a good sign for increased fluorescent light bulb use.

I’m switching to candle light in my home and office.  Of course, I’ll need to buy some more fire extinguishers for the kids now……. Wacky Wednesday: Did Not See It Coming