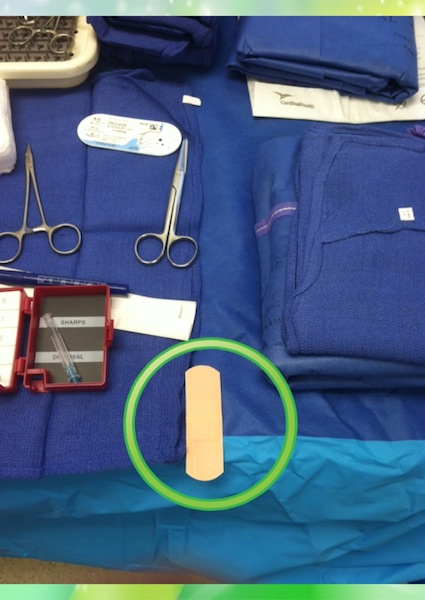 Ahh, my General Surgery residency days.  I try to block them mentally as much as possible, because they sucked.

In restrospect, most of the hours in the hospital were filled with busy work with some surgical education.  It was important to me to try to glean as much surgical experience and knowledge as possible, since I was living in the hospital, and I really wanted to be a great surgeon.

One of the general surgery attendings at the community hospital we rotated at had a very high patient satisfaction rate.  His patients LOVED him.   Also, even in the complicated cases, his ICU patients tended to do better, and the families seemed to be more optimistic if he was the surgeon.  Even his partner didn’t exactly have the same results or charisma.

I scrubbed in with him many times, and I learned little surgical tidbits from him over the months that I rotated with him.  I learned that blunt surgical dissection is pretty much always better than sharp dissection, since pushing things out of the way in a natural anatomic plane is less bruising, less swelling, and less pain-inducing than using surgical instruments.

I also learned that although he was smoother and more efficient than virtually all of the other surgeons on staff, he really didn’t have substantially better skill or magic pixie dust he used in his cases.

You have to understand that most general surgeons LOVE a special bandage.  It’s sort of like a talisman-  the more thick and large a bandage was, the more intricate the design, well, damn, you MUST have had surgery, and it was performed by one of the gods of surgery who had deigned to achieve human form that day, and as luck would have it, agreed to operate on you!

The older surgeons (read, uh, surgeons around my age or older today!) would use such big dressings, I swear I was scrubbed in a vampire war zone somewhere.  The “surgical” bandages would be able to absorb not just the blood of the surgical patient, but also the blood of every patient on the floor, leaving a nice tasty snack for a colony of vampires, just in case we got invaded by vampires that particular day.  The surgical dressings were just complete overkill-  and I thought that was normal, and simple band-aids were abnormal.

So, eventually it dawned on me to ask this particular surgeon why he used Band-Aids all of the time.  I’ll never forget what he told me  (and paraphrasing, since I didn’t have a smart phone at the time to secretly record him.)

“Roy, my patients have had surgery just like every other patient in the operating room today.  However, if you are nice to them and encourage them to return to their normal lives, they will respond positively.

If you point out that their surgical incision only needs a Band-Aid, as opposed to a 3 inch thick mass of surgical gauze battle wound dressing, your patient will think that their surgery could not have been that serious, and they will recover faster.”

So, to this day, if I have a small surgical incision, I always use a Band-Aid.  And it works-  I feel that my patients recover faster, since their surgical site is covered with something that’s in every medicine cabinet in the world.

Of course, it’s also probably my charming personality and bedside manner, but I digress…..